RGU students commended for their creativity at Tailors trade award

Talented fashion and textile students from RGU Gray’s School of Art have been recognised at the ‘Professional Development Award Scheme’, organised by a branch of the historical Seven Incorporated Trades of Aberdeen.
The organisation, which was founded in 1587, includes The Tailors Incorporation which introduced the award last year following on from the Weaver Incorporation, which has had a similar award for its trade since 1987.

Second year student Chiara Lamon won the first place award while Chloe McKinstry, who is in her third year, took the second place spot at a ceremony at the trade body’s headquarters at Trinity Hall on the 16th April.
The competition looks for those who excel in creativity and technological skills and is advertised to RGU students studying for a Fashion and Textiles degree.
It is judged on the basis of a submitted written document detailing their plans, followed by a second stage presentation of their design to the judges.
Chiara and Chloe both received a certificate and a cash prize to help with the development of their craft.
Chiara, whose winning project looks at the concept of uniforms and how they could be interpreted for use in everyday life, commented: “Being chosen as the winner
for the Tailors Award feels like a big step for me and my professional growth. It is a great achievement for myself and it genuinely boosted my self-confidence within the subject and inspired me to keep working hard to reach my results. I also believe it will be a strong support for my professional presentation and help me
both as achievement and as a reminder to support me in future choices and paths.
“Working on this project has been really important for me in terms of discovering my strengths and personal direction within the subject and this award gave me a solid confirmation for my future dreams.”
Chloe McKinstry’s project is based on the contrast between manmade vs nature, specifically looking at the architecture within the North-east and how this contrasts with the trees and other natural areas.
“To be selected as this year’s runner-up for the Tailors Career Enhancement award of 2019, is a huge honour and a great achievement for myself,” she said.
“I am extremely thankful to have been given this opportunity and I am excited to be able spend the cash prize furthering my knowledge and skills within fashion and textiles.
“Career enhancement awards such as the Tailors award are extremely important for students like myself. The award creates lots of new opportunity to explore deeper into the creative industry and allows individuals to be challenged as they think about their future.
“Ultimately, these types of awards boost the confidence of young designers and allows the ability to physically make some initial steps that will help with the development of careers, goals and future endeavours.”
The Incorporation hopes that it will strengthen its industrial ties with RGU and support young students in developing their skills and future careers.
Derek Simpson, Deacon of The Tailors Incorporation added: “We were hugely impressed by the student’s preparation and application whilst taking part in this competition.
“We are keen to support these young students – build their confidence, recognise and reward their talents and to assist them in their future careers.” 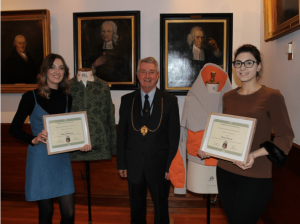