The seven windows in the Major Hall are filled with stained ornamental glass, after designs emblematic of the different Trades.  These are listed in order, with No. 1 (Hammermen) being situated on the left hand side of the west gable, with the other six following in consecutively round the hall.

Incorporated 1519. This Trade embraces no fewer than ten branches, namely – Cutlers, Pewterers, Glovers, Goldsmiths, Blacksmiths, Gunsmiths, Saddlers, Amourers, Hookmakers and Glaziers. Appropriate emblems of all these branches are designed in the window, whole round the margins is the couplet:

Our art over all mechanics hath renown,
Our arms the hammer and the royal crown.

The centre panels represent Tubal Cain at the forge, with Zillah at the bellows.

Incorporated 1532, but recognised as a Company as early as 1398. In the panels represented Boaz, with Ruth gleaning in the fields: and in other portions of the window are placed the different positions of the arms and emblems of the Trade. The following lines run along the margins:-

May He, the Sun of Righteousness display,
On all our actions His celestial ray;May we in peace, our daily bread possessAnd smiling Providence our labours bless;Contented may we live and die resign’d,And, in the skies, a crown of glory find. 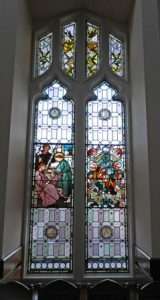 Incorporated 1527. In the panels are represented, on the one side, Jesus and Joseph’s workshop and, on the other, the arms of the Trade.

The Carpenter & Hooper makes on trade,
In great esteem these men ought to be had,
Their trade should be the first in place by right,
For Mary was betrothed to a Wright;
And Justin Martyr, he down right awoues,
That Jesus Christ himself made yokes and plows.

MOTTO – “Our Redeemer liveth for ever”

Incorporated 1532, but had the power to elect Deacons in 1511. In the panels are represented ST. Paul employed as a tentmaker: and the arms of the Incorporation. The following lines used to be sung in praise of the Merchant Tailors at the annual election of the Lord Mayor of London:-

When Adam and Eve out of Eden were hurl’d,
They were at that time in king and queen of the world;
Yet this royal couple were forced to play
The “Taylers”, and put themselves in green array;
For modesty and for necessity’s sake,
They had figs for the belly, and leaved for the back,
And afterward cloathing of sheep-skin they made;
Then judge if a “Tayler” was not the first trade,
The oldest profession : and they are but railers,
Who scoff and deride men that be “Merchant Taylers”. 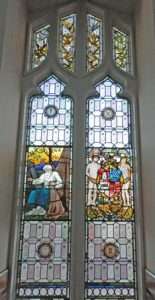 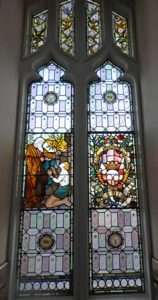 Incorporated sometime before 1484. In the panels are represented the Prodigal Son being presented by his father with shoes to put on his feet; and the arms of the Trade.

As we make shoes for others’ feet.
Lord grant we may be shoed
With Gospel peace, which is most meet,
While here we make abode.

ARMS – Gules, a cutting knife in pale, proper, handle, or; in chief, a ducal crown, or; in sinister chief, a tower, arg.

MOTTO – “Lord, crown us with Thy glory.”

As far back as 1449, Robert Petit and William Hunter were sworn in as Deacons of the Weavers, and searchers of all the Wabster craft. IN the panels are represented the primitive method of weaving between the branches of trees, and the arms of the Trade.

As the weavers’shuttle passeth in its place,
So help us, Lord, to spend our days in grace,
That so our hearts may still united be,
To Jesus Christ and all eternity.

ARMS – Azure, three leopards’ heads, arg., holding in their mouths a spule, or shuttle, or; in middle chief, a tower, arg.

Incorporated in 1532, but were recognised by the Town Council as early as 1444. IN the panels are represented the High Priest offering up the sacrifice, and the arms of the Trade.

Whilst we do sheep and oxen slay,
Frail mankind here to feed;
Help’s, Lord, our Father this day,
Give us our daily bread.

ARMS – Gules on sinister side, a slaughter axe in pale, proper, handle, or; three knives fess ways, proper, handles, or; in dexter chief, a tower, arg.

In addition to these windows, the beautifully designed panels at the top of the stairs contain the coats of arms of the Seven Incorporations and the Convener Court, with quaint but appropriate mottoes underneath each description of the various crafts.  Also found, the University, Royal and Bon-Accord arms.