Regarding the house of the Holy Trinity at Aberdeen, Kennedy remarks : “King William in the latter end of his reign established a branch of the Order at Aberdeen, whither he sent in the year 1211, two Friars, who had been recommended to him by Pope Innocent; and granted and confirmed to them his Palace and Garden on the South side of the town, for their Convent.”  Their church remained entire until the end of the 18th century, when it was demolished.  The Trinity Friars Place at Aberdeen gave name to Trinity Burn, now better known as the Denburn, and the Trinity Port at the south end of the Shiprow, one of the 6 Ancient Gates of the burgh which was removed some 200 years ago.  King Robert Bruce, by a Charter dated in the I4th year of his reign, granted to the community of Aberdeen the privilege of holding their Trinity Fair within the Burgh. 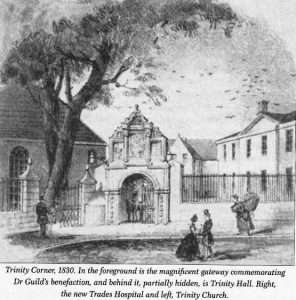 The Old Trades Hall in the Shiprow, Aberdeen.  c.1850  This area, at the southern end of the Shiprow, was the site of the Monastery of the Trinity Friars until 1559 when it was burnt to the ground by Protestant Reformers.  In 1631, having purchased the lands, Dr William Guild, gifted their old Chapel and other buildings to be a hospital and meeting house for the Seven Aberdeen Incorporated Trades. These were Hammermen, Bakers, Wrights and Coopers, Tailors, Shoemakers, Weavers, and later the Fleshers.  Dr Guild was one of Aberdeen’s ministers and afterwards became Principal of Kings College.  The Chapel became an Episcopal Church until 1794 when it was removed and replaced by the building seen at the left of the photograph.  It was vacated in 1843, when the Congregation joined the Free Church, and was then sold and eventually became the Alhambra Music Hall until 1902.  On the right was the Trades or Trinity Hall – often known as the Tarnty Ha.  It had a projecting wing tower and corbelled angle turret, and was demolished around 1857 for Railway development. The Trades had already moved into their new premises in Union Street in 1846.

The extension of the railway system to Aberdeen sealed the fate of the old Trades Hall.  When the Aberdeen Railway was projected in 1844, the hall and site, which extended from the foot of the Shiprow to near the present line of railway, were scheduled, and although not required for railway purposes, the buildings had to come down when Guild Street and Exchange Street were constructed.  The last of the buildings was taken down in 1857, and while the excavating operations were in progress a careful watch was kept for relics and antiquities, the following notes being taken by a local antiquarian at the time :-

” A great number of human bones were found when the digging for Guild Street commenced, which had probably been the site of the ancient burial grounds of the Trinity Friars.  It had extended to the south end of the convent, and ran east from the side of the church for some space.  The bones were generally in a very great state of decay, the skulls dropping to pieces when lifted. The remains of a coffin in one instance were found, which fell to dust on exposure.”

About the middle of this part of the ground were found a bit of iron resembling a key, and the bowl of a small spoon curiously ribbed on the back.  The foundation walls of the hall, which were probably those of the old convent, were built with lime on the outside and with clay between the stones.  The walls were several feet in thickness.  At the east end of the hall, 12 or 13 feet below the surface, were found the remains of a more ancient building, composed of rude stones cemented with clay.  Below some of the lowest were found oaken boards which seem to have formed part of some ancient vessel, and near the same place 5 or 6 oaken beams were found, which had probably supported rafters in the old building (King William the Lion’s Palace).  They had holes in the side as for the ends of posts being morticed into them.  The ground here was very moist, puddled with clay and small stones.  On excavating westward, the old wall was found continued along the side of the more modern one at the distance of about 14 inches.  About the middle of this part of the building a silver tablespoon was found, much corroded as if by the action of fire.  A portion of what looked like a buff jerkin, and some remains of old shoes with very large hobnails in the heels, were also found.”