A senior lecturer from Robert Gordon University has become the first female member to be admitted to the prestigious Aberdeen Tailors Incorporation.

Design Researcher and Senior Lecturer, Josie Steed, from Gray’s School of Art was sworn into The Aberdeen Tailor’s Incorporation at a special ceremony at Trinity Hall, Holburn Street, on Wednesday 2 March, as a new craft member and becomes the first female member in the Trade’s history.

The Aberdeen Tailors Incorporation is one of the Seven Incorporated Trades of Aberdeen, an ancient society of craftsmen in Aberdeen. Founded in the 13th century, the organisation brings together craftsmen of similar skillsets to set and maintain standards of their craft; to ensure their skills are passed on to future generations; and to support and look after fellow members.

Senior Lecturer from RGU, Josie Steed, said: “I am absolutely delighted to be admitted to Aberdeen’s Incorporated Trades through my membership of Aberdeen Tailors Incorporation. I have a passion for design and the craft of fashion tailoring and look forward to promoting the trade and its value to society. I feel very honoured to be the Incorporation’s first female member and look forward to promoting the craft and its value to the North east and beyond.

“We work very hard at Gray’s School of Art to forge links with those in the creative sector and with members of the Incorporated Trades, as borne out through the Tailor’s Career Enhancement Awards which support the development of students as they prepare for a career in fashion and textiles. My membership to the Tailor’s Incorporation will strengthen this relationship and open up new opportunities.”

Speaking about this momentous occasion for the Tailors, Richard Sainsbury, Deacon for Aberdeen Tailors Incorporation said: “The process of entrance is laid down in the Rules of the Trade and was overseen by Deacon Richard Sainsbury along with Late Deacons Derek Simpson and Ian Webster, with the piece produced by Josie Steed being unanimously approved by the membership as being of exceptionally high standard.

“The Tailors Incorporation has, for a number of years, had a close association with the fashion and textile design department of Gray’s School of Art, supporting the annual Tailors Personal Development Award Scheme programme with 2nd & 3rd year students studying for their BA(Hons) Fashion & Textile Design.”

RGU design lecturer at Gray’s School of Art, Josie Steed’s research focusses on raising the profile of Scottish manufacturing and creative businesses within a global context through knowledge exchange. She has led a number of innovation projects including Innovate UK, Arts & Humanities Research Council (AHRC), Scottish Government and The Scottish Informatics and Computer Science Alliance (SISCA). 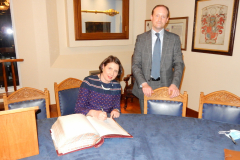 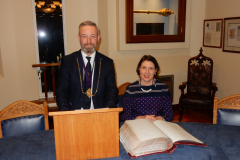 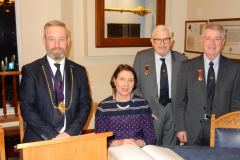 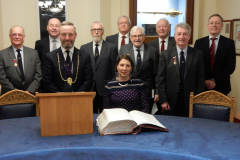