The Seven Incorporated Trades again opened the doors of Trinity Hall to the public for Doors Open Day.  This event is coordinated nationally by the Scottish Civic Trust and forms part of a joint initiative from the Council of Europe.  It is a great way to find out about the hidden heritage on your doorstep and is your opportunity to see behind the scenes of everyday buildings as well as important landmarks. With forty venues throughout Aberdeen being open this year the Incorporated Trades were happy to participate again.

Trinity Hall at the corner of Great Western Road and Holburn Street is the third Trinity Hall to be occupied by the Seven Incorporated Trades of Aberdeen. The original was created from the former Trinitarian Friary (hence the name) when this was acquired in 1631. The second building and the first purpose-built Trinity Hall dates from 1847 and this building now incorporates one of the entrances to the Trinity Shopping Centre.

As well as showing artefacts and historical collections of craftsmanship dating back to the late 1500’s a number of new displays were constructed for the day.

In the Major Hall a dinner setting was laid out with table decorations, the Wrights and Coopers also arranged that various pieces were on display in relation to the Awards they grant to Northern College for both first and second year carpentry students. The first year students manufacture a window frame and a prize is given to the best piece of work.  Judging for this will commence next week. 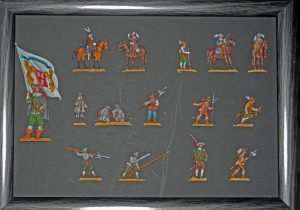 As the 13th September was the anniversary of the Battle of Justice Mills in 1644, one of our members produced a panoramic scene of the area from the Bridge of Dee to Justice Mills showing the positioning of the armies and hand painted model soldiers to show the style and type of uniform and weapons used at that time.

During the day large numbers of visitors were greeted and given a short tour of Trinity Hall lasting around 35 minutes.