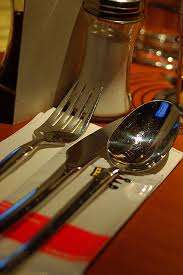 Each of the Seven Incorporated Trades of Aberdeen have their own Grace, which is delivered extempore at the various Dinners and official occasions in the life of Trinity Hall.

According to the “Book of Traditional Graces” publication, the Fleshers Incorporation Grace, which was used up until 1989, was:

Whilst we do sheep and oxen slay
Frail mankind here to feed.
Help’s Lord to pray Our Father this day
Give us our Daily Bread

The Patron in 1989,  Rev. Ian Douglas, questioned if these traditional Graces were actually meant to be read in this manner so set out to write Graces which would reflect something of the tradition and emphasis on each Trade.  He based his new Graces on the themes of the stained glass windows on display in the Major Hall, with the Fleshers window depicting “The High Priest offering up a Sacrifice”.  Therefor, since 1990, the Fleshers Incorporation Grace has been:

Almighty Creator of the Earth
Which brought forth every living creature,
According to their various kinds.
As we are blessed by them in our daily trade.
So we pray, Bless this our table
That he who is our High Priest
May be present in our Fellowship