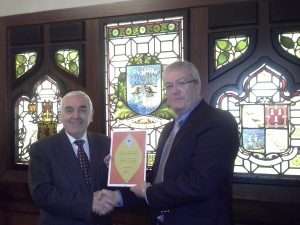 The Deacon Convener accompanied 25 city Burgesses on the 27 February 2014 for a tour through Trinity Hall, explaining the history of the Seven Incorporated Trades from the 1500’s to date. Also included in the tour were various anecdotes and information relating to the artefacts and essay pieces. The tour lasted just over 2 hours and was finished with tea and coffee in the minor hall with some questions being put to the Deacon Convener regarding points raised during the evening.

Fred Dalgarno in thanking the Deacon Convener for an informative evening commented that this was his third formal tour through Trinity Hall and that he has learned something new on each visit, he then presented a certificate noting the visit. In response David Parkinson thanked those present for their interest and stressed that the Burgesses of Guild were very important to the city but were far better known within Aberdeen than the Burgesses of Trade which are made up of the members of the individual Incorporated Trades. It is hoped that this will not be the last visit by the Burgesses of Guild and new Burgesses will have the opportunity to visit Trinity Hall in the future.

Pictured above Dean of Guild, Fred Dalgarno presenting a certificate to Deacon Convener David N Parkinson after a visitation of Aberdeen Burgesses of Guild to Trinity Hall.