On the morning of the 21st of June 2017, Wrights and Coopers member Bill Beattie was admitted as burgesses of Trade at the start of the full council meeting at Aberdeen Towns House.  He was proposed for membership by Deacon Convener George Esson. Having met the requirements for admission and undertaking to pay the necessary dues to the Lord Provost they then accepted the responsibilities incumbent by law as a true and faithful of a City Burgess of the city of Aberdeen. 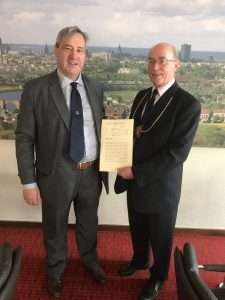