In old Scots, the doup is the bottom of anything, including the buttocks. Annually, the Shoemakers Incorporation annually ‘rode’ the marches or visited the property and land they owned. If a new member was present, he was douped on one of the march stones. The method being that he was lifted by the other members and placed three times on his doup on the stone.

The Trade uses the march or Douping Stone on Watson Lane off Rosemount Place, although others were apparently used in the past.

Of historical interest, below is a photograph of Eric Munro being douped circa 1929, having joined the Trade on 1st November 1928. 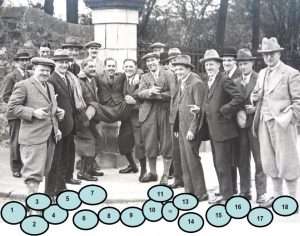