The second weekend in May2017 is the weekend that the Deacon Convener is invited to attend the election of the Master of the Cordwainers of York.  This event has been visited for the last few years by David N Parkinson who as Deacon Convener and Late Convener represented the Seven Incorporated trades of Aberdeen.  He was latterly joined by Deacon of the Aberdeen Shoemakers Incorporation, Mervyn Donald who is now Master of Trades Hospital of the Incorporated Trades.  This year the current Deacon Convener George Esson could not attend due to prior arrangement so David & Mervyn represented the Aberdeen Trades again this year.

After travelling down on the Friday an invitation was extended to attend a dinner at the Grange Hotel with the Masters and Clerks of the London Guilds attending the Cordwainers Election and some of the other Scottish Conveners.

Saturday morning is normally when the York Cordwainers organise a tour of one of the City‘s many historical sites.  This year an interesting tour of York Minster but specifically in relation to the embroidery works carried out by the textiles and embroidery staff at the Minster some of which dates back to the 15th century.  Access was also allowed to look at some of the new works and vestment being worked on by the Minster

Saturday evening starts with a reception, prior to the dinner the Election of the Master Cordwainer and the office-bearers is carried out.  This year’s dinner was held in the Merchant Taylors’ Hall, Aldwark, York, Just inside the historic city walls.

The Sunday morning we meet in the Company of Cordwainers, Bedern Hall and attend morning service at the All Saints Church, Pavement, York.  Processing along the lanes to one of the main squares and then to the service.  This year the service was conducted by Reverend Jane Nattrass, Chaplain to the Company.  After the Service we process back to the Bedern Hall along the Shambles and lanes of old York.

The customary photographs are taken and those that are not travelling great distances normally stay for lunch.  The Scottish contingent: Aberdeen, Irvine, Kirkcudbright have all for lunch for a number of years.

We very much enjoyed our weekend in York, catching up with those we have met previously, as well as making new contacts. 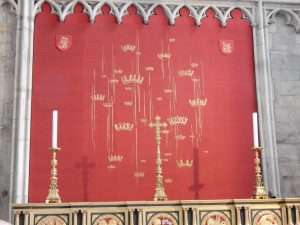 Embroidered Screen in side chapel at York Minister 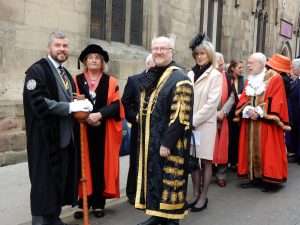 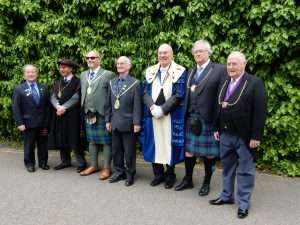 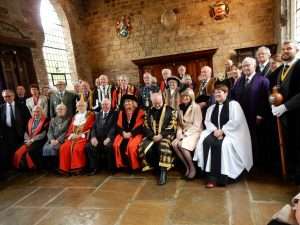 Assembled guests with the Lord Mayor and Sherriff of York 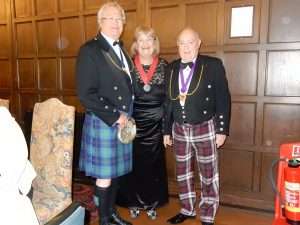 Master Cordwainer, Lord Mayor of York and Beadle of the Cordwainers