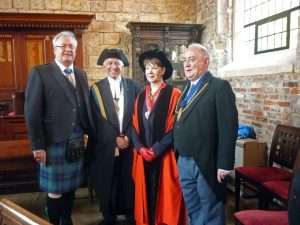 After travelling down on the Friday, an invitation was extended to attend an evening meal at the Grange Hotel with the Masters and Clerks of the London Livery Companies associated with the leather industry, along with the Master Elect, Clerk and Dinner Convener of Cordwainers of York. In all, 39 people sat down to an informal dinner.

After the meal, a surprise was sprung on the Masters and Convenors to each give a piece of advice to the new Master Elect from their personal experience, thinking on your feet did not seem to unduly worry those present.

Saturday morning is normally when the York Cordwainers organise a tour of one of the City‘s many historical sites. This year the option was the Minster. https://yorkminster.org/history-and-conservation.html

Late Deacon Convener Parkinson and his wife, however, decided to spend the day in neighbouring Harrogate. Deacon Donald and his wife went to Fairfax House to view a specialist exhibition of shoe design and manufacture.

Saturday evening starts with the Election of the Master Cordwainer in the Undercroft of the Merchant Adventurers Hall followed by Dinner upstairs in the Great Hall. York was badly hit by the floods over the winter and the work done by the Merchant Adventures Company in having the building back in operation so swiftly has to be applauded.

On Sunday we attend the Company of Cordwainers of the City of York service at the All Saints Church, Pavement, York. Processing from the Guild’s Bedern Hall, along the lanes to one of the main squares and then to the service provides a photo opportunity for the many tourists in York. This year the service was conducted by Rev Jane Nattress, (Chaplain to the Company) with readings from the Master Sharon Hobman and the Lord Mayor of York, Cllr Sonja Crisp. After the Service, we process back to the Bedern Hall along the Shambles and lanes of old York for a reception.

The customary photographs are taken and those that are not travelling great distances normally stay for lunch. The Scottish contingent: Aberdeen, Irvine, Kirkcudbright have all stayed for lunch for a number of years.

We very much enjoyed our weekend in York, catching up with those we have met previously, as well as making new contacts with the London and York Livery Companies. 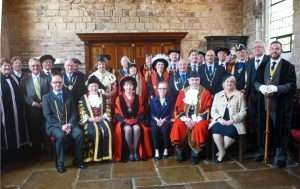