On Monday the 29th July the Incorporated Trades held a concert for members with entertainers from the Aberdeen International Youth Festival.
Now in its 41st year the Aberdeen International Youth Festival is one of the premier arts festivals in the world. The Seven Incorporated Trades are happy to continue their sponsorship of such an important part of Aberdeen cultural activities.
The concert held in Trinity Hall commenced with a performance from Maya Tarasova, a young opera singer from St. Petersburg, Russia who has begun to make a name for herself in her home city through winning a major schools competition in 2012. This is her second visit to Aberdeen International Youth Festival and to Scotland and she is able to come here with support from the St. Petersburg forum. On her visit in 2012 she auditioned for the Royal Conservatoire of Scotland where she was well received. However, at only 16 years old she is still too young to be awarded a place at the moment but hopes to try again in the future and we wish her well in her endeavours.

A buffet meal was then followed by a prize draw with the funds raised being used as part of our charitable donations to local charities.

The second part of the evening was on a local theme with Cameron Ross playing a selection of old and new traditional Scottish music. Cameron Ross, 19, from Stonehaven has won many firsts in traditional fiddle competitions. He has been fortunate to have been taught by some of Scotland’s finest traditional musicians and attended the North East School of Music in Aberdeen to have lessons with North East fiddle maestro Paul Anderson. While at school, Cameron gained a place at the National Centre for Excellence in Traditional Music at Plockton High School where he completed his sixth year. He is now studying a BA (Hons) in Scottish Music at the Royal Conservatoire of Scotland in Glasgow. This year, Cameron is taking part in an exchange year at East Tennessee State University, where he will study Bluegrass, Old Time and Country music. Previous performances include Celtic Connections, the Aberdeen International Youth Festival, the Danny Kyle Stage, Feis Rois, the Gothenburg Kulturkram Festival, and his band, Thalla were runners up in this year’s BBC Radio 2 Young Folk Award. Cameron is honoured to be playing a fiddle gifted by violin maker Ian Greig from Banchory, handcrafted by Ian himself. Ian kindly offered to support Cameron in recognition of his dedication to traditional music. 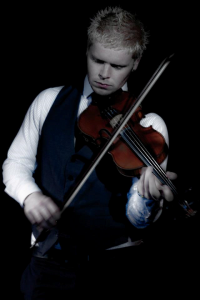