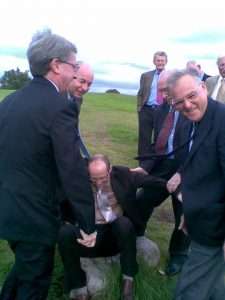 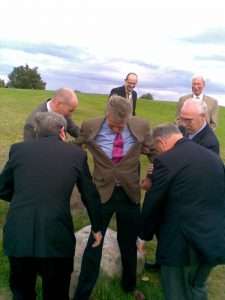 city, and the initiation of new members by “doupin’.  Derek Simpson, Michael Morrice, Michael Allen and Ed Shaw are pictured with Kevin Brown (left) and Stuart Stephen (right) during the initiation.

An old Scottish tradition that is still continued through some of the Incorporated Trades in Aberdeen.  Doupin is to drop or dump someone down smartly on the buttocks, specifically in the initiation of burgesses by bumping them on the boundary stones.  New members of the Trade were douped during the Riding of the Marches (checking the Trades boundaries (normally marked by Stones) and is carried out for on those attending for the first time.   They were hauled to the stone and members bumped the new member on the stone.  This helped reinforce the remembering where the stones per placed.  The Tailors Incorporation carries out this act at the march stane on the hill behind the Trinity Cemetery.