A huge well done to all the very creative students at Robert Gordon University Gray’s School of Art Aberdeen who participated in the 2022 Aberdeen Tailors Incorporation Awards.

A special well done to the winner Poppy McGrath and runner up Grace Angus for their stunning pieces which are pictured on the mannequins. … 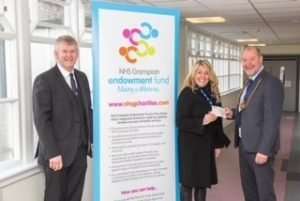 The Aberdeen Fleshers Incorporation have generously matched funds raised via a raffle held at their Election dinner on the 20th of November 2021, totalling £850.
Deacon Leith said: “The Intensive Care unit cared for Late Deacon Andrew Paxton. The Fleshers Incorporation thought this to be a fitting donation to make, to express their gratitude to all the team at the ICU.”

A senior lecturer from Robert Gordon University has become the first female member to be admitted to the prestigious Aberdeen Tailors Incorporation.

Design Researcher and Senior Lecturer, Josie Steed, from Gray’s School of Art was sworn into The Aberdeen Tailor’s Incorporation at a special ceremony at Trinity Hall, Holburn Street, on Wednesday 2 March, as a new craft member and becomes the first female member in the Trade’s history. … 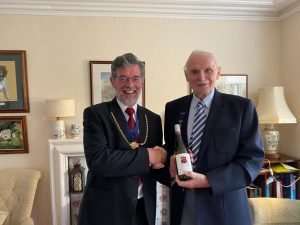 Ex Deacon Donald Law recently celebrated an amazing 70 years as a member of the Aberdeen Shoemakers Incorporation and of The Seven Incorporated Trades of Aberdeen and is our longest standing member – ever!  What an incredible amount of time and a wonderful achievement.

Deacon Brian Donald presented Ex Deacon Donald Law with 12 bottles of wine (although only 1 in the photo!)
…

Well done to the Aberdeen Shoemakers Incorporation for raising a massive £3306.25 for My Name’5 Doddie Foundation at their dinner dance earlier this year!

A message from the man himself?

Trinity Hall was the venue for a multiple event on Wednesday 1st May 2019 under the auspices of the National Karate Institute. Organised by Ronnie Watt OBE, ORS, the guest speaker was American born Professor Will Reed from the Yamanashi University in Japan.

Before the seminar, a Scottish Samurai Awards ceremony was held, with nine recipients including Deacon Convener Mervyn Donald and his wife Margaret receiving Shogun awards for their work in the community. … 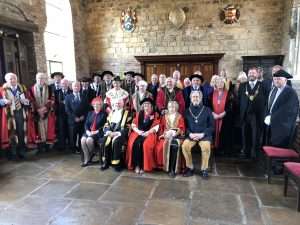 The Deacon Convenor and Deacon of The Aberdeen Hammermen Incorporation were delighted to attend the Company of Cordwainers of York’s Charter Weekend. The tour of York Minster was magnificent and Mike the Tour Guide was very knowledgeable. The Annual Livery Dinner in the fantastic Merchant Adventurers Hall, was excellent and pleased to celebrate the election of their new Master, Mrs Anne Reid MBE. …

What could possibly link Robert Gordon’s College – the Grammar School and the Seven Incorporated Trades of Aberdeen?

An unlikely conundrum but they are linked – by one person – but not recorded and perhaps not realised………until now and here is how it happened.

I was preparing to travel to Edinburgh to attend the Association’s Dinner in November 2017, my first as President, and checking that I had all that I needed for the function; Toast to Robert Gordon; President’s Speech and the President’s Badge of Office. I had been given the badge some month’s earlier when elected President but, in truth, had not looked at it. I needed to check that it was the right badge and to check how it was worn. It is a substantial gold and enamel badge of office worn with an elaborate neck chain. I turned it over and saw the engraved legend: …

Charlie House is celebrating today following a substantial donation of £400,000 from the Seven Incorporated Trades of Aberdeen, via its Trades Widow Fund Charity. The generous donation, which is the single biggest donation in the history of the Seven Incorporated Trades of Aberdeen, will go towards funding the specialist support centre’s spa pool area which will feature in the new building.
…

Talented fashion and textile students from RGU Gray’s School of Art have been recognised at the ‘Professional Development Award Scheme’, organised by a branch of the historical Seven Incorporated Trades of Aberdeen.
The organisation, which was founded in 1587, includes The Tailors Incorporation which introduced the award last year following on from the Weaver Incorporation, which has had a similar award for its trade since 1987.
…