Trinity Hall visit by the Consul General of Japan of Scotland 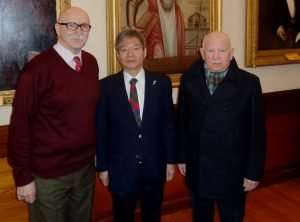 We were pleased to welcome to Trinity Hall the Consul General of Japan in Scotland, Mr Daisuke Matsunaga andmembers of the Order of the Scottish Samurai. Mr Matsunaga was appointed to his current post in May 2016 following a distinguished career in the Japanese Ministry of Foreign Affairs. His previous roles were Director for the Climate Change Division in the Ministry of Foreign Affairs and while in that post, also served as His Majesty the Emperor’s official English interpreter for two years.

He has also served as Assistant Press Secretary for the Ministry of Foreign Affairs, Minister for the Japanese delegation to the Organisation for Economic Co-operation and Development (OECD) and Minister and Deputy Chief of Mission at the Embassy of Japan in Vietnam before taking up post as Deputy Consul General at the Consulate General of Japan in Hong Kong.

He was Consul General at the Consulate General of Japan in Dubai, Senior Counsellor with Japan Oil, Gas and Metals National Corporation (JOGMEC) before taking up his current post in Edinburgh.

Mr Matsunaga is pictured with Ronnie Watt, 9th Dan master of Shotokan Karate and founder of the Oreder of the Scottish Samurai, and fellow member Albert Thomson, who is also a member of the Shoemaker Incorporation and who conducted the visit.”