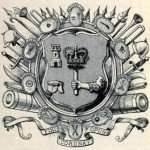 The Hammermen originally comprised craftsmen associated with metalworking – or “men who wield the hammer” in more poetic terms. Members came from a variety of established trades, with everyone from blacksmiths and goldsmiths to clockmakers lending their experience and expertise.

Sword-makers and armourers are also part of the history of the Hammermen, along with the lorimers who crafted the bits worn by horses through the generations. Goldsmiths, tinsmiths and pewterers have also been among the members as well as other surviving trades such as locksmiths.

Today the men of the hammer embrace every aspect of modern engineering across the full spectrum of disciplines. Through the admission of sons of members, a wealth of other trades and professions are also represented within the most senior of the Seven Incorporated Trades of Aberdeen.