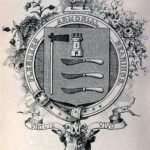 The Seven Incorporated Trades of Aberdeen came to pass when the Fleshers were added to the membership in 1657 to entitle them to use the first Trinity Hall following its establishment in the city centre.

The Fleshers, drawing its skilled men from butchery businesses and the slaughterhouses of the burgh, had first been incorporated as a trade in 1534. It became custom for new entrants to provide a lavish banquet as part of their acceptance, making use of their renowned produce.

Today the Fleshers take pride in their role within the social calendar of the organisation, with each of the Seven Incorporated Trades of Aberdeen sharing responsibility for organising a range of functions to open the doors of Trinity Hall to members and guests alike.